If given the choice…

To be mocked by people for getting the same food every day or risk getting food that is a bit hit or miss…Sorry, gonna take the mockery.

My broken ear bud looks like a handmaid from The Handmaids Tale. 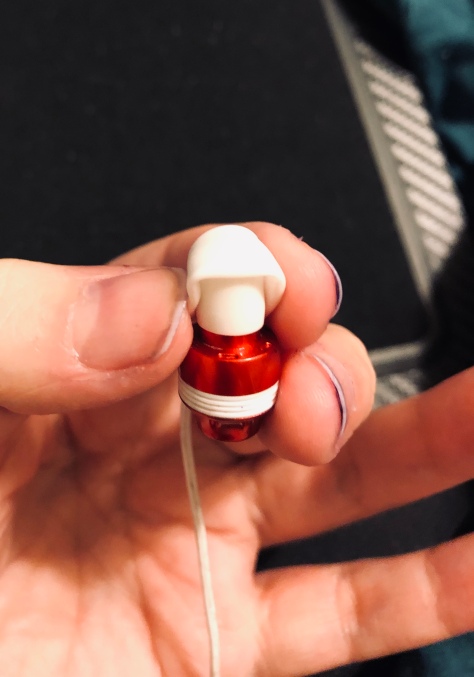 This has been a random pic.

I did the unthinkable…

HOLD ON!! DON’T LOOK AWAY!!! I really mean Twilight WITH RiffTrax.

What’s RiffTrax? Do you know about Mystery Science Theater 3000? It’s the same guys who did that but now they add commentary to modern, well-known movies, too.

(For those still too young to know MST3K, it was an old show on the SyFy Channel where a guy trapped on a space station with two little robots was forced to watch really bad B Movies. In order to get through them, the three would make comments during the movie to comedic effect. Think of it like React Videos but actually funny…shots fired.)

Anybut, my friends and I decided to watch the entire Twilight series….WITH RiffTrax (truthfully, the ONLY way to watch it). And while we were watching the first movie with the hilarious commentary, the biggest laugh was possibly when Edward Cullen walked in and one of the commenters said, “Laaaaaaaadies.” The scene was shot in slow motion and Edward slowly raised his eyes.

For some reason this was the funniest thing we’d ever seen and now we say that to each other ALL…THE…TIME.

There are no clocks in Las Vegas Casinos.

Also no windows (or at least, extremely few windows). They don’t want people to realize they’ve been gambling their money away all day and night.

Ok, harsh. They actually just want you to lose track of time cause you’re more likely to keep gambling if you don’t know how long you’ve been sitting at the same machine, table, or whatever.

I was in a play in high school…

My senior year of high school I was cast in our school’s production (Thespian Society production to be clear) of Steel Magnolias. I was cast as Ouiser Boudreaux. If you’re only familiar with the movie, or even if you are not, that was the character played by Shirley MacLaine. She was the kind of stubborn, angry one. Of course there’s more to her character than that, but for a public high school production in Indiana that is the best description I ever got.

Anybut, the point is! In the script is a scene mentioning a strange cake. A red-velvet armadillo cake….as in, when you cut into the cake…it looks blood red inside.

Now as a mature high school student, I made the best decision ever. For my senior graduation party (which I shared with another girl because there was no way enough people would show up to one thrown just for me, but that’s a story for another day), I decided to have an armadillo cake. The other girl who I shared the party with was in on it. She played Annelle in the play with me.

Did we get a lot of confused stares? Absolutely.

Did we care? Abso-fucking-lutely not.

It was funny. We were proud of it. And it was amazing.

And do I have a picture of it? OF COURSE!! But not cut into, but trust me….it was blood red inside. 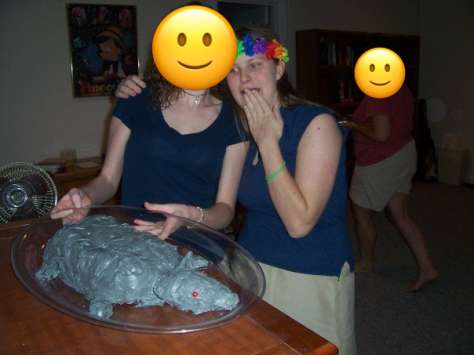 Do  I also have pictures of me as Ousier Boudreaux? Yes, but you’ll have to wait for a future post for those. 😉

I have a bone to pick…

I used to say this ALL the time in middle school through high school. I was the ONLY person I knew who said this. I never heard anyone else use it. I never saw someone use it on TV or anywhere. I WAS MADE FUN OF FOR SAYING IT ALL THE TIME!!!

Now, all of the sudden…it…is…EVERYWHERE!!!

I mean, to be honest, it’s not like it’s the most innovative, creative, or whatever saying ever thought of. It rhymes. It’s catchy. And if you’re from the midwest it may have other connotations…ok…maybe not really, but maybe!

I guess…just to have a smug reaction to all the people who used to make fun of me for saying it all the time. SEE!!! I thought of something people say all the time now!

NOTE: I am aware this may actually have been a popular phrase in the south and I’m just a stupid northerner who thought of something that millions of people already said….and maybe I heard it in a movie as a small child my parents were watching and I just don’t remember because I was a child watching a movie for older folks…….BUT! At least among my friends in Indiana, I was ahead of my time.

Have I ever mentioned….

How much I love quesadillas? Well I do.

Journey to the Past